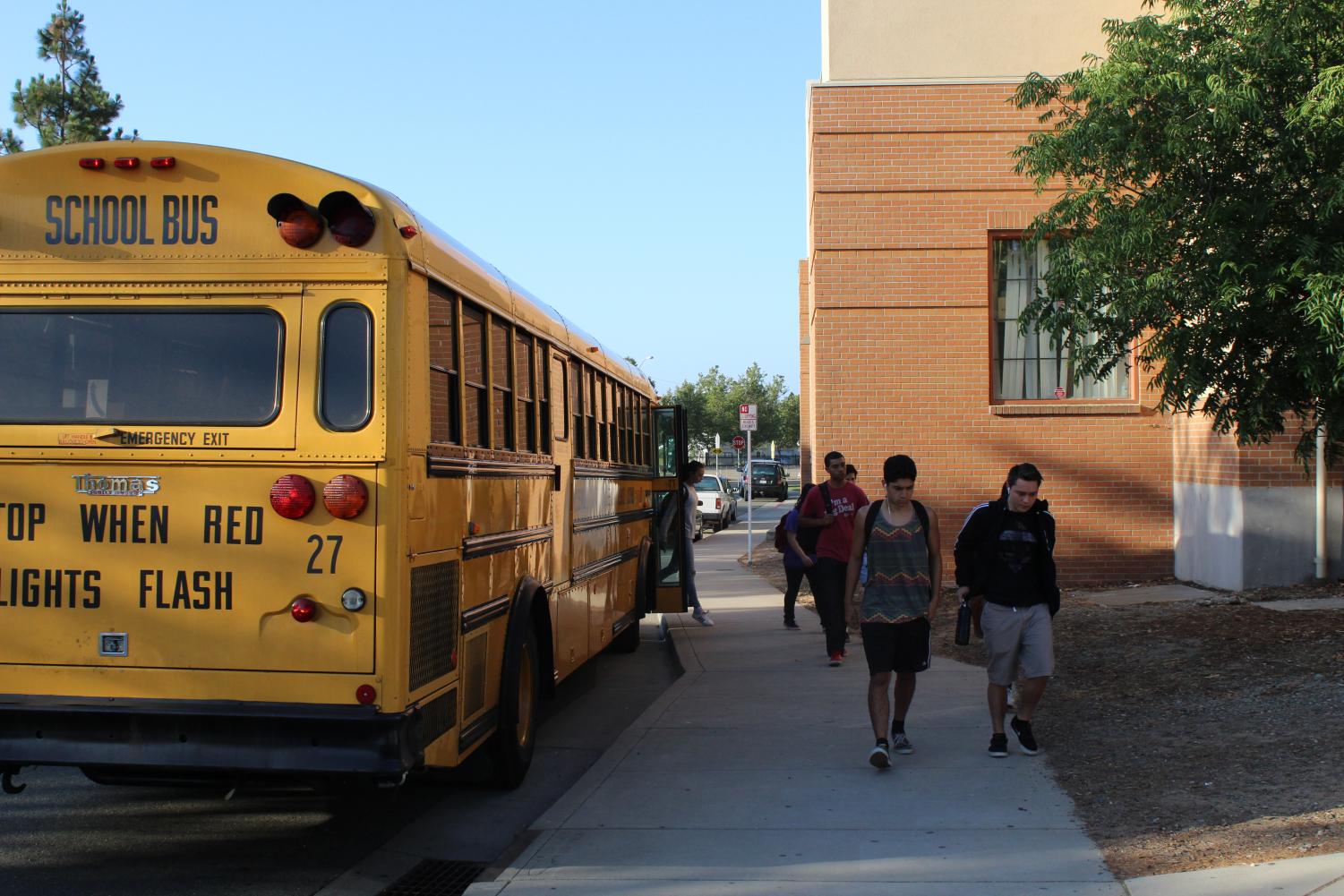 Above, students arrive for school to start class at 7:40. California high schools are required to move start times back to 8:30 or later by 2022. ((NICOLE KHUDYAKOV / EYE OF THE TIGER))

Above, students arrive for school to start class at 7:40. California high schools are required to move start times back to 8:30 or later by 2022.

(NICOLE KHUDYAKOV / EYE OF THE TIGER)

I definitely think that the students were much more alert and ready to learn when we started at 8:30.”

For RJUHSD students, this means seeing start times nearly an hour later than the current 7:40 a.m, and an estimated end time of 3:30. If the district waits until 2022, current freshmen will see this change their senior year. According to superintendent Denise Herrmann, however, the district anticipates it could be ready to make the change by 2021 at the earliest, which would mean current sophomores would also experience the change in start times. 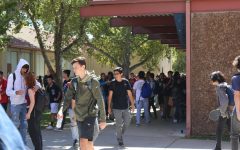 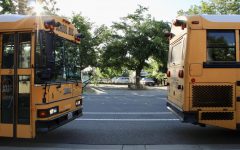 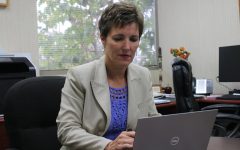 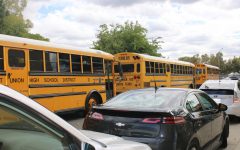 The bill aims to give students more sleep to take on the school day. Senator Portantino, lead author of the bill, has cited The Academic Pediatric Association and the Center for Disease and Control, stating that both establishments found adolescents perform more effectively, both academically and socially, with a later school start time.

“I definitely think that the students were much more alert and ready to learn when we started at 8:30,” Herrmann said. “So I do have a preference for the later start time. I just wish that we had more flexibility in how we were going to do it and having more flexibility on the high school and middle school schedule.”

According to principal Nicholas Richter, the district will now start to work through the logistics of the change.

“It’s a little bit more than just shifting start times,” Richter said. “We would start with some big conversations at the district level saying ‘What are the big factors that are going to be impacted?’”

Moving back the start time presents several scheduling challenges with transportation and after school activities. The district plans to use schools in California that already have a later start time as a model for these changes.

According to Herrmann, the district is also considering moving teacher collaboration hours, currently held after school on Mondays, to before school.

With this plan, Mondays would be just as long as any other school day.

With a later start time comes a later end time, which will impact scheduling for sports and other after school activities.

The start time impacts different sports in different ways. Sports that practice outdoors run into difficulties with practicing too late into the night. Baseball and softball, for example are restricted by the need for sunlight. Especially prior to daylight savings time kicking in during the spring, it could be difficult to complete these practices before the sun goes down. 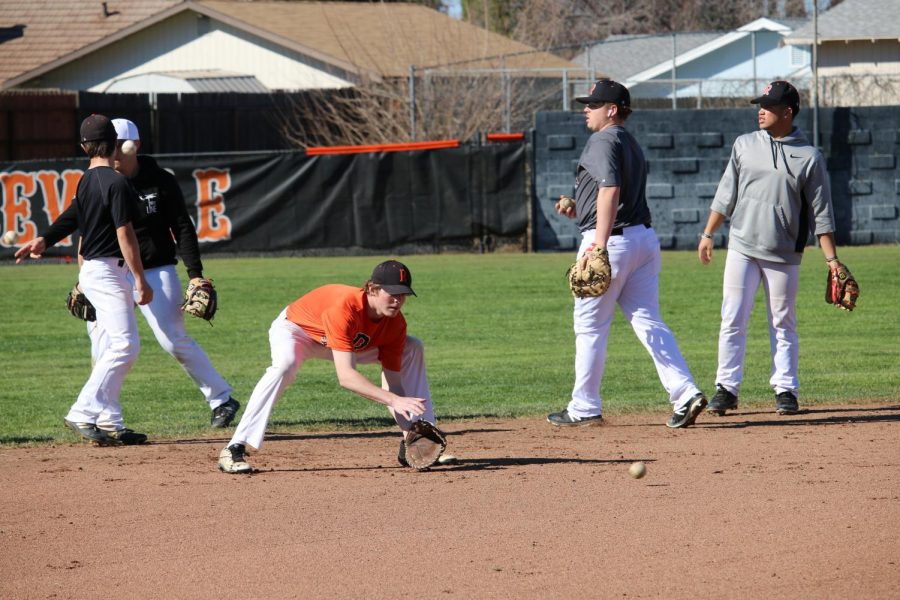 (FILE PHOTO / EYE OF THE TIGER)
Above, RHS baseball team during practice last year. The new start time will cause scheduling issues for sports like baseball, which practice outdoors and cannot practice too late into the night.

Senior baseball athlete Braden Holcomb said he feels that the team will have to adjust to the late start time, but will find a way to make the change work.

“We have to get all of our games in during the daylight, which can be hard at times because we will be pressing times as it gets dark and it will affect how we see the ball and how we play,” Holcomb said. “But most of the time we have been able to [finish] the games without having to use the lights.”

According to varsity basketball coach Greg Granucci, he does not anticipate the change will impact basketball practices all that much, as they run on a late schedule as is, with unsettled practice times.

“I don’t think [the time] is going to affect us as much. With a later start time maybe we can have some teams practice in the morning before school,” Granucci said. “We practice until 9 o’clock at night – some teams do anyway. So I think we will be able to adjust pretty smoothly.”

Water polo and swim athlete Faythe Mccown said she would prefer an earlier start time to a later release time.

“I don’t like the start time because it takes an hour out of your day and your afternoon is basically gone,” Mccown said. “And sports practices will have to be longer. So I don’t like how it affects our practice times.” 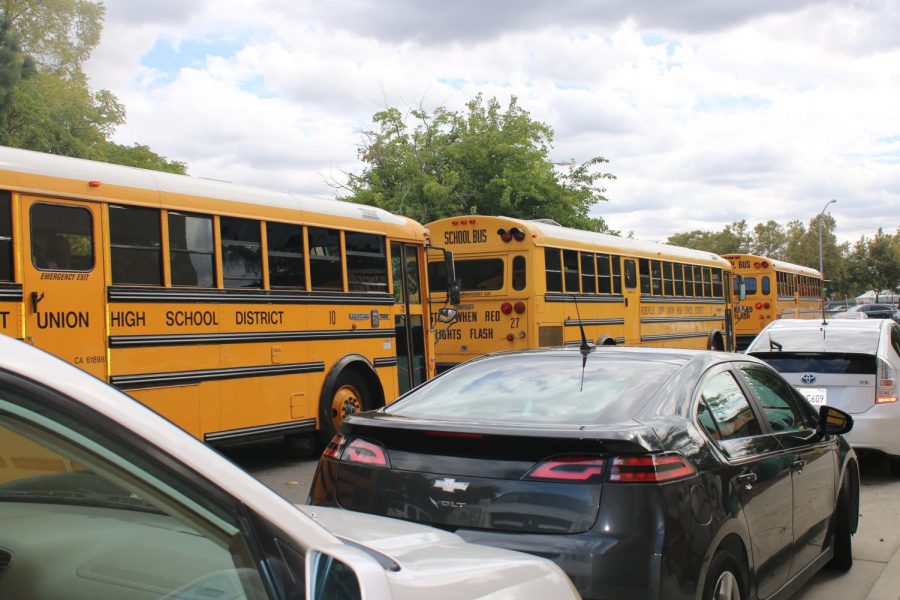 (FILE PHOTO / EYE OF THE TIGER)
Buses line up on Berry Street outside of RHS after school. When SB-328 mandates a later start time for high schools and middle schools, RJUHSD and RCSD could face logistical issues with bus coordination.

Transportation director Julie Guerrero said as of now there are no for sure plans.

“So we do not have any ideas yet. We are going to work together and propose different variations of available times that may work,” Guerrero said.

If the later release time leads to later game times for sports, Guerrero worries that this means bus drivers for away games will have late shifts; according to Guerrero, drivers need to have their mandatory break between late shifts and these drivers would not be able to cover their early morning shift.

Currently, the RJUHSD bus routes take about an hour or an hour and a half depending on the route, and the bus drivers have enough time to drop off and pick up students from both districts due to the gap right now of start times of RCSD and RJUHSD.

With a smaller window, the transportation department is discussing hiring more bus drivers to cover shorter routes to adapt. Guerrero is concerned this will mean a lower driver income and thus lower overall retention.

“It’s not going to be easy because we need to try and entice new drivers to become bus drivers,” Guerrero said. “And it’s going to be hard because the routes are going to be short.”