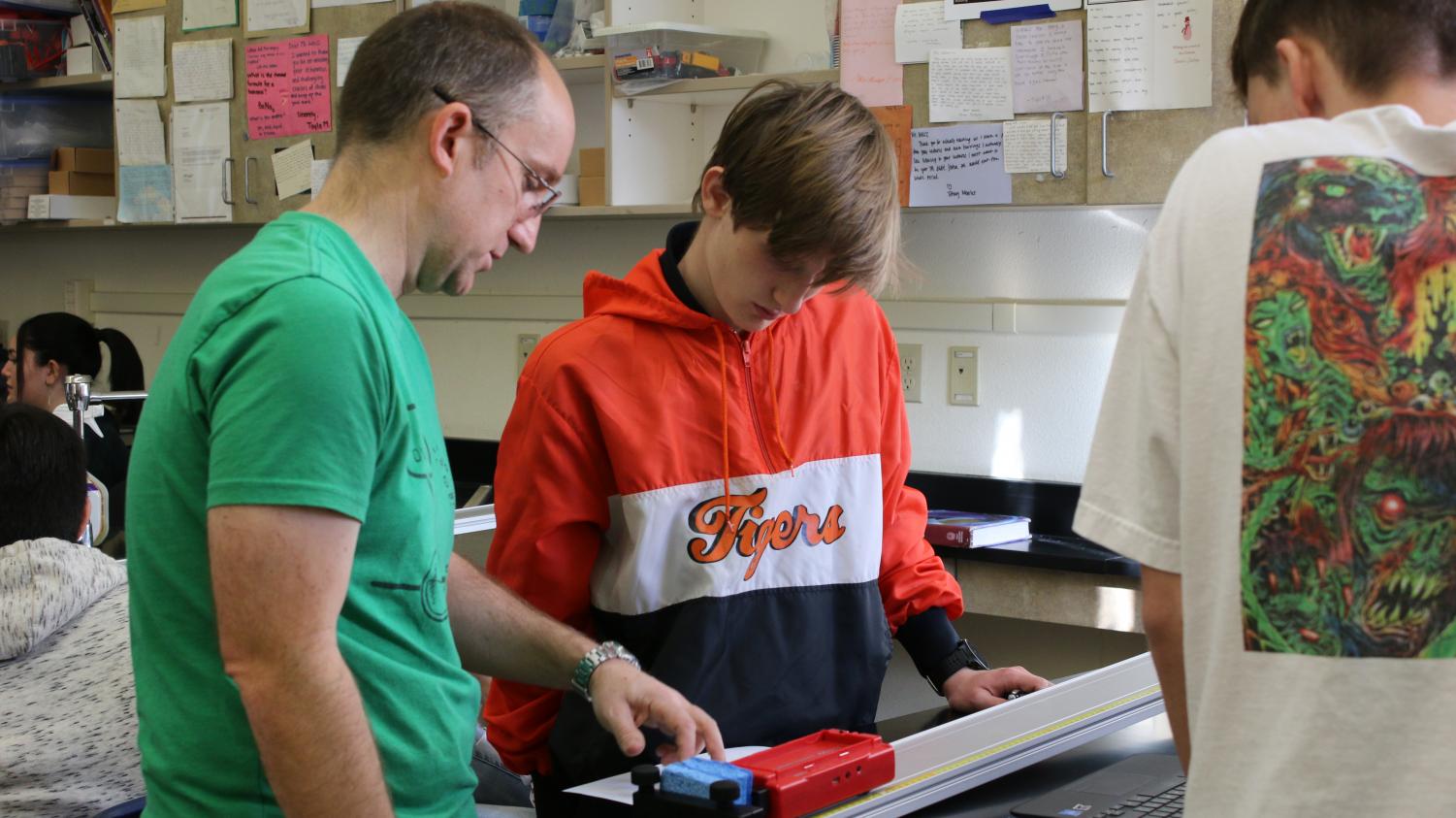 (NATHAN HANDLING / EYE OF THE TIGER)

This year, for the first time, sophomore students took NGSS Physics, rather than CP Chemistry. The move is part of the switch to the new NGSS science pathway.

Last year, physics teacher CJ Addington was the only one credentialed to take the course.

Over the past year, teachers that previously taught chemistry have worked towards their physics credential and taken on the new curriculum.

The switch in the order of RHS’ science pathway caused a shift in curriculum for both chemistry and physics, as teachers try to gear their course to the level of their audience.

Before, physics had a higher math entry requirement than chemistry, and as a junior year elective course, could afford to be more rigorous than its predecessors, and gear more towards AP Physics.

As teachers tried their hand at the new curriculum for the first time last semester, they found some of the units – particularly the more math-heavy ones – went too fast for students to pick up.

According to physics teacher Oliver Weiss, students struggled when they hit the first math-focused unit. 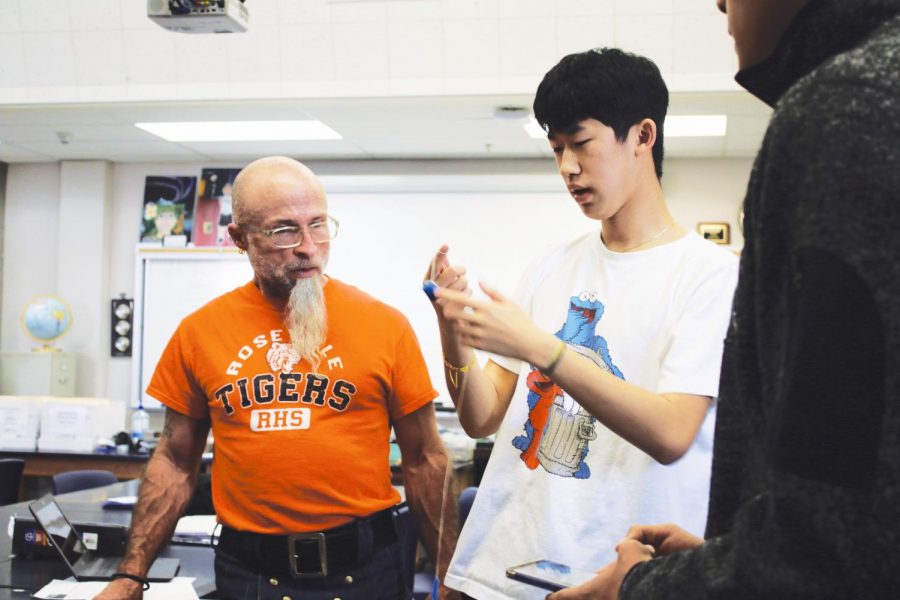 “We realized that the math content was a little too heavy,” Weiss said. “This was a course that wasn’t piloted anywhere, so we had to kind of figure out as we went along, take in input from students and we made some adjustments.”

According to physics teacher CJ Addington, going into the second semester, teachers added more math intervention into the course, splitting up lessons and taking days to help students with the topics that give them trouble.

With NGSS Physics, teachers are trying to avoid some of the math, like quadratics and trigonometry, that used to be common in the previous physics course, as students will not have learned them yet in math.

Before, we sort of assumed that the kids knew the math, and then we would just throw out the equations”

Increased use of ROAR intervention periods provided by the teachers aim to help students to adjust to the increased use of math and formulas, but also take the time to go over and teach the basics of physics, vocabulary, basic equations and metric conversion – things that were previously touched upon briefly the first but have now entered the spotlight.

“Before, we sort of assumed that the kids knew the math, and then we would just throw out the equations,” Addington said. “But now we realize we have to back up a little bit and actually teach the math content.”

Addington said this may leave gaps between NGSS Physics and AP Physics, which he teaches as well. He is trying to smooth out and alter the AP curriculum to catch students up on the content missed in the first-level course.

The reverse has happened for chemistry. Now, as a junior level elective course, NGSS Chemistry can offer more depth and rigor than before, and align closer to the AP course.

Weiss said he prefers the change in the pathway. According to Weiss, part of the aim in making chemistry the sophomore course was to give students pursuing science in college a leg up on the science placement exam, which is entirely chemistry.

Meanwhile, Weiss believes the hands-on nature of physics, versus the more abstract nature of chemistry, will make it more attainable and more relevant to students. 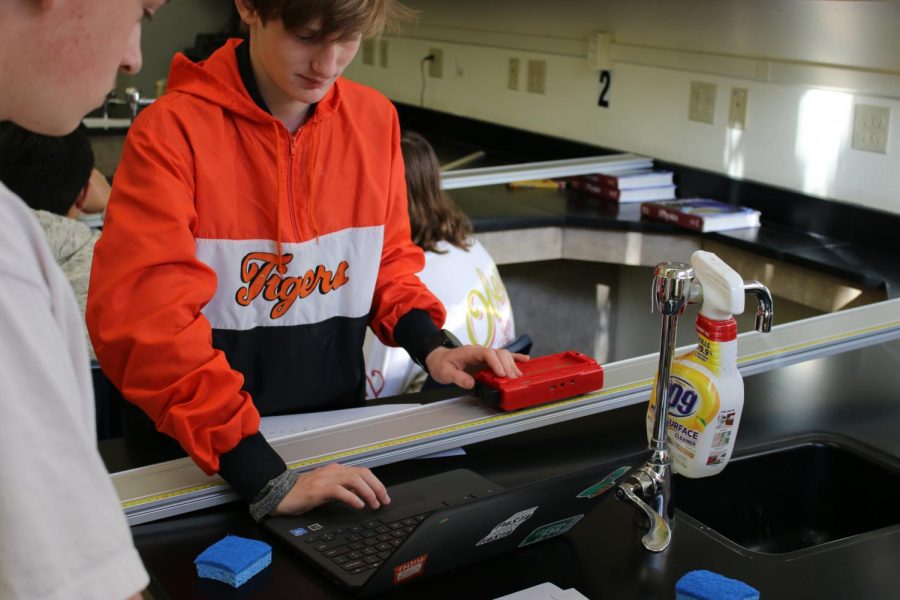 (NATHAN HANDLING / EYE OF THE TIGER)
Students in Oliver Weiss’ first period NGSS Physics class work on a lab last Wednesday. This is the first year sophomores took NGSS Physics since it replaced CP Chemistry in the science pathway.

Teachers are relying more on hands on labs, allowing students to observe concepts such as momentum and impulse through the use of block cars, tracks and household sponges.

“We can actually see a cart move down the track. We can adjust a variable by making changes,” Weiss said. “So hopefully by applying math to things we can actually will help students get that math better.”

“The student survey responses have been extremely positive,” Wiess said. “We have a bunch of teachers that are really dedicated to teaching, that stepped up, and I think we’re doing a great job trying to fight for resources and making sure that this transition really works out for the students of Roseville High.”