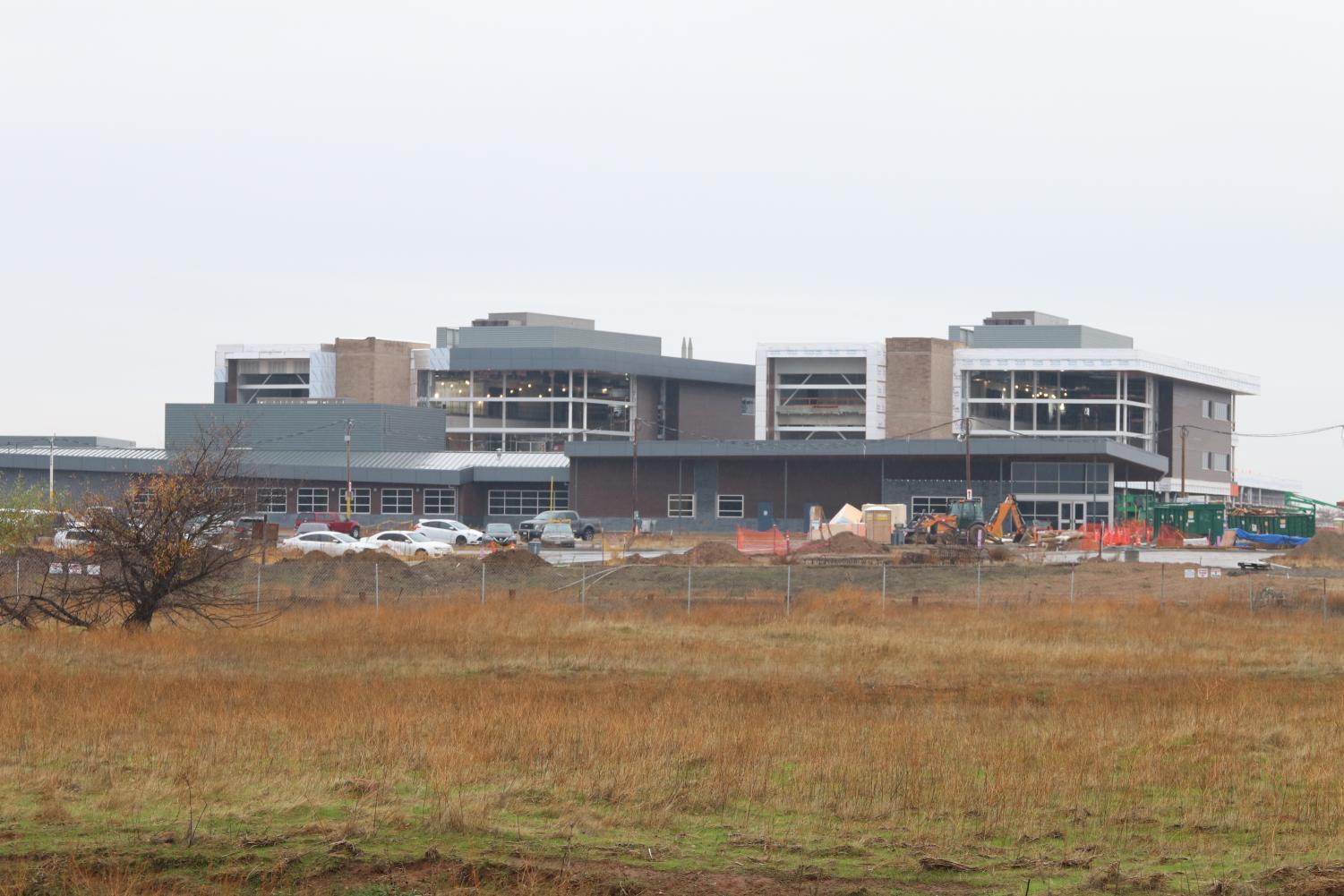 As RJUHSD looks to open its sixth high school next year, Eye of the Tiger investigates the impact a new school will have on the district.

Look out for the January 28 edition of Eye of the Tiger for the second article, centered on the effect of declining student enrollment at Oakmont.

West Park High School will open to incoming freshmen and sophomores in the West Park community next school year. As a result, Roseville and Oakmont High School will lose parts of their current attendance zone.

While Roseville will lose just over 100 students, administrators expect Oakmont to drop from 2150 students to 1290 by 2022.

In order to construct new attendance lines and combat falling enrollment rates due to the addition of a new school, Roseville Joint Union High School District turned to demography firm Cooperative Strategies. Demographers then used projected population patterns to establish a map and plan for next year’s shift in boundaries.

“We’re focused on transportation and trying to make lines continuous so that way we don’t cause issues as far as making parents and families have to travel much further,” Joe Landon, assistant superintendent of business services, said.

“Realistically, if this were a voting zone that would be illegal,” said Meredith Richards, assistant professor of education policy at the University of Texas, Austin.

According to Landon, the district is looking to form a committee that would rework RJUHSD boundaries completely during the 2022-23 school year. This would require looking at current and projected RJUHSD demographics and population patterns to potentially draft new attendance lines.

“The demographer can have certain projections, but moving patterns can change and unexpected results can happen,” Landon said.

These unpredictable patterns have made it difficult to create lines that would maintain student populations for prolonged periods of time. 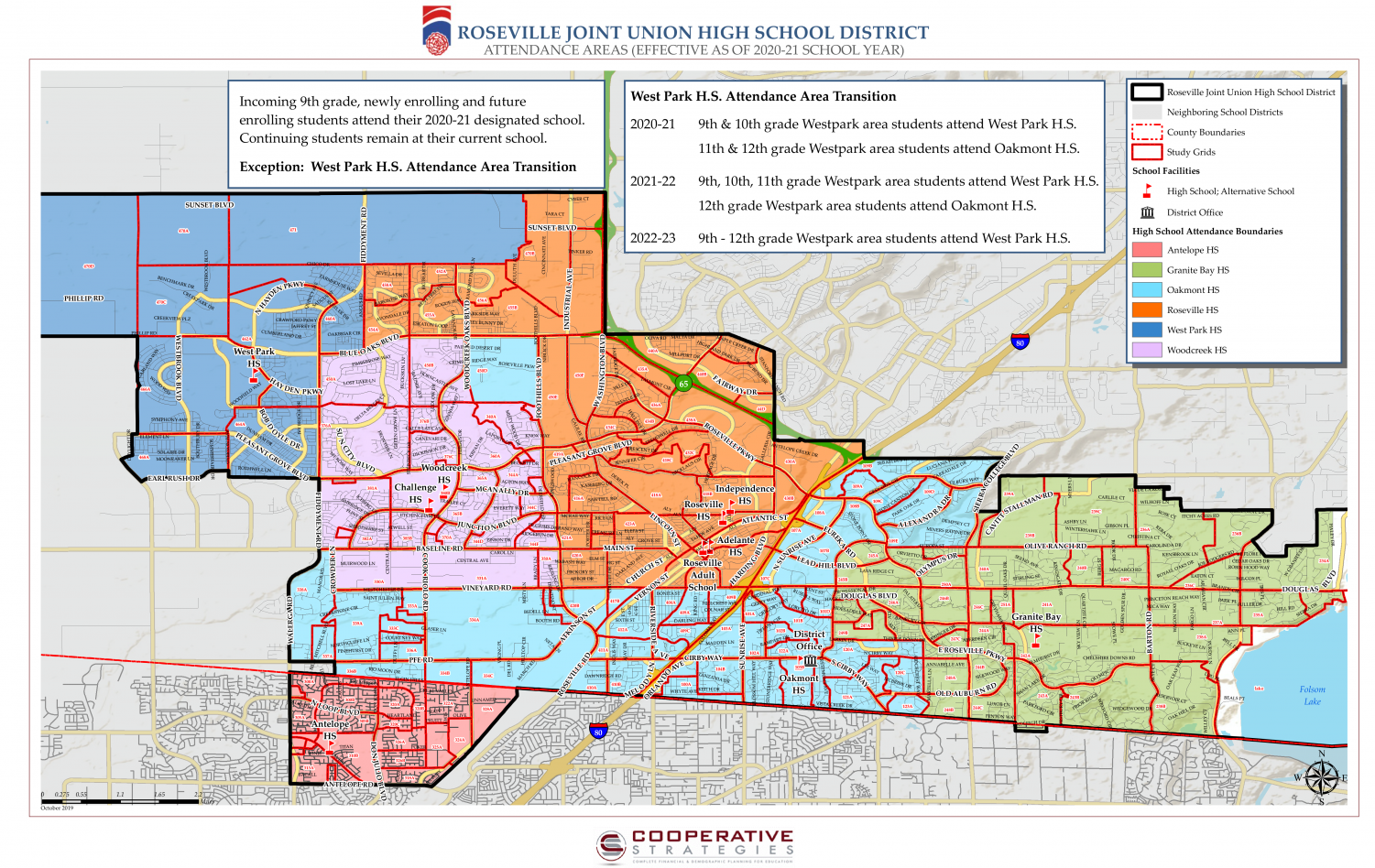 Above, the 2020-2021 school year RJUJSD attendance boundaries. All students grades nine through 12 zoned for West Park High School will attend their designated school by the 2022-2023 school year.

According to David Kaitz, office manager for Davis Demographics, it is often times difficult to predict population trends in suburban areas because of the constant influx of new residential developments. Sometimes this means an increase of students at a given site.

But for a growing district like RJUHSD, it meant the addition of another school.

“Demographers have to do a lot of guessing and you can analyze trends and conduct statistical analysis but it is just such a wild card,” Oakmont assistant principal Michelle Mahoney said.

When residential areas are established, younger families tend to move into these homes. To accommodate for the increase in student population across all levels of academia, school districts will build sites in these new residential areas and those young families would send their kids through the K-12 system closest to them.

But in RJUHSD, sending students to the school closest to them would lead to an uneven distribution of students. A school with a student population significantly less than its counterparts mean less sections of a class may be offered or an absence of certain elective opportunities.

“People who bought a house in a certain neighborhood expected to go to a certain high school,” Landon said. “When we change it, we can upset families.”

When West Park opens next year, Oakmont will lose one of its three attendance sections to the new school and one of the remaining two areas is sparsely populated. This year, over 700 students attending Oakmont live in the West Park community.

Every neighborhood has a lifecycle and it’s going through a different phase. Sometimes there’s not a population to be served.”

As for the rest of Oakmont’s attendance zone, slow household turnovers mean that younger families are not moving into the area to generate more students.

To keep districts and their respective schools at their intended capacity, administrators rely on household turnovers to ensure enrollment counts stay consistent.

According to Northwestern finance strategy professor Therese McGuire, those dynamics shifted after California’s Proposition 13, which froze property taxes at one percent of the property’s cost at the time of acquisition.

Owners were inclined to remain in their current homes, which rewarded their long-time residency with minimal property tax rates.

This allowed the greater Roseville community, like any suburban area, to assume the role of a retirement-friendly residential area.

This results in slower turnovers and schools that were once designed to accommodate for a spike in student population are now subject to enrollment fluctuations.

“Every neighborhood has a lifecycle and it’s going through a different phase,” Kaitz said. “Sometimes there’s not a population to be served.”